* For reference, The Clash Royale game Reviews websites are all approved, there are no viruses and malware. 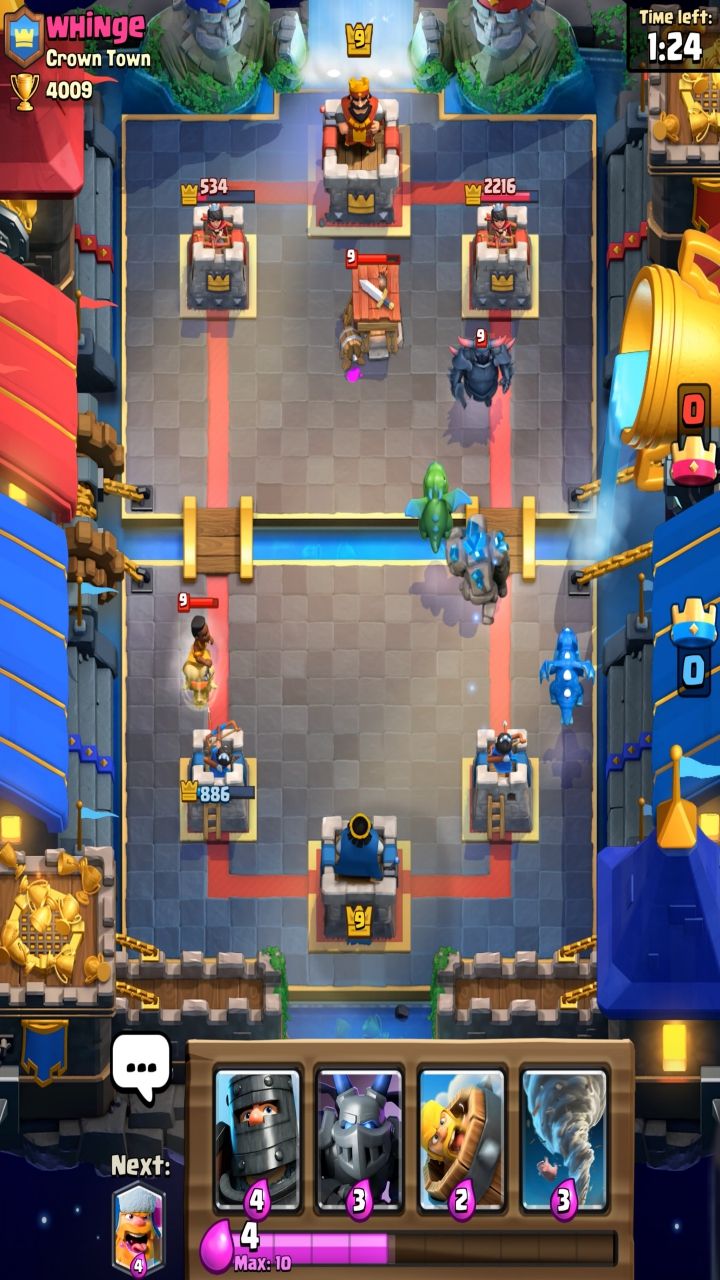 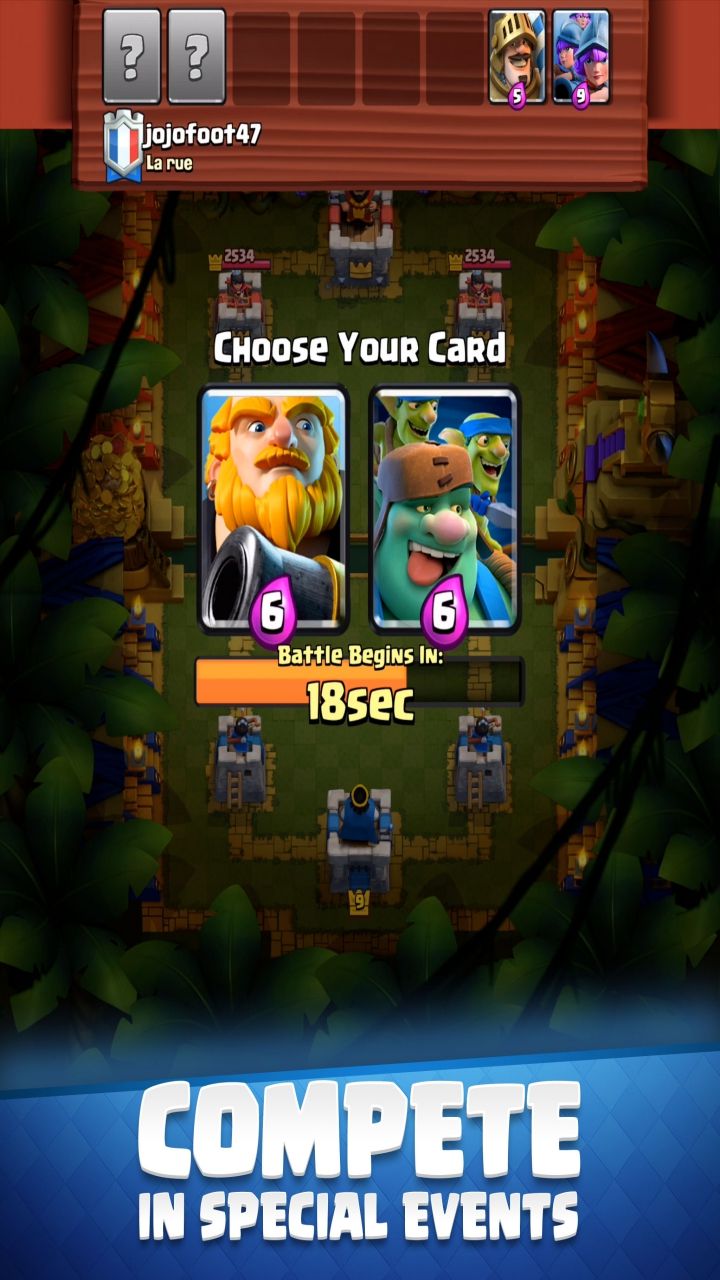 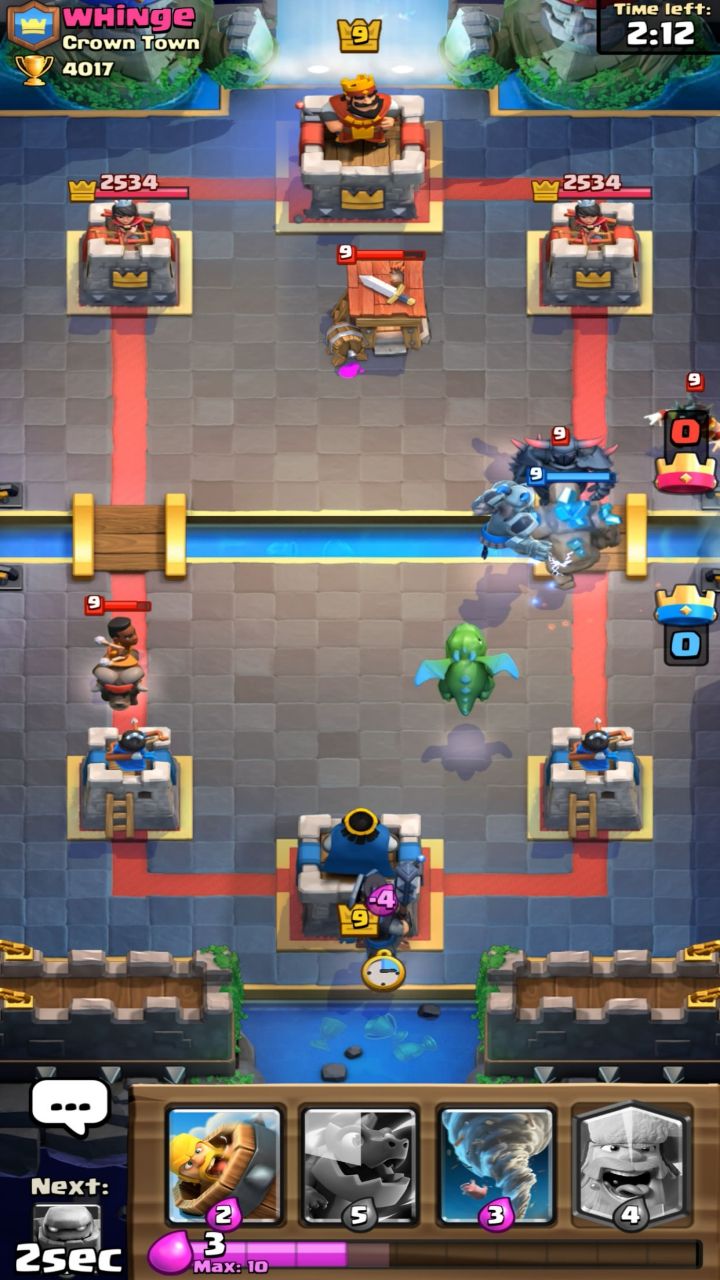 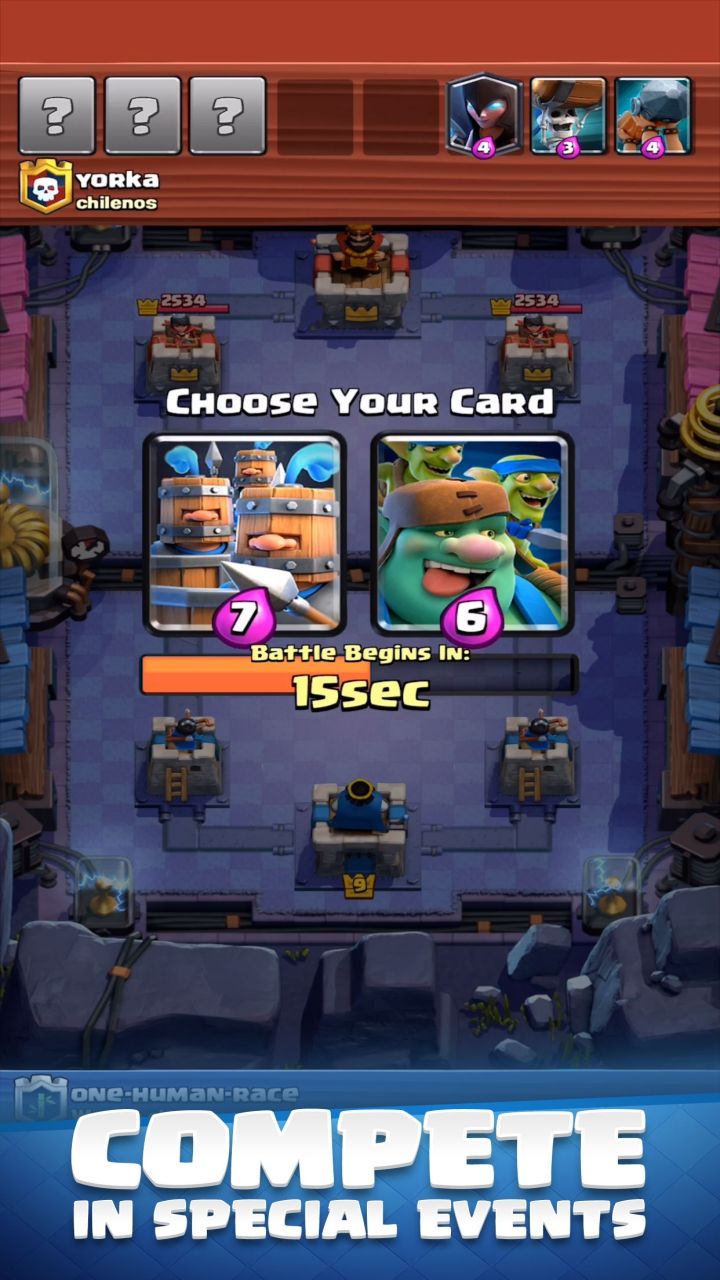 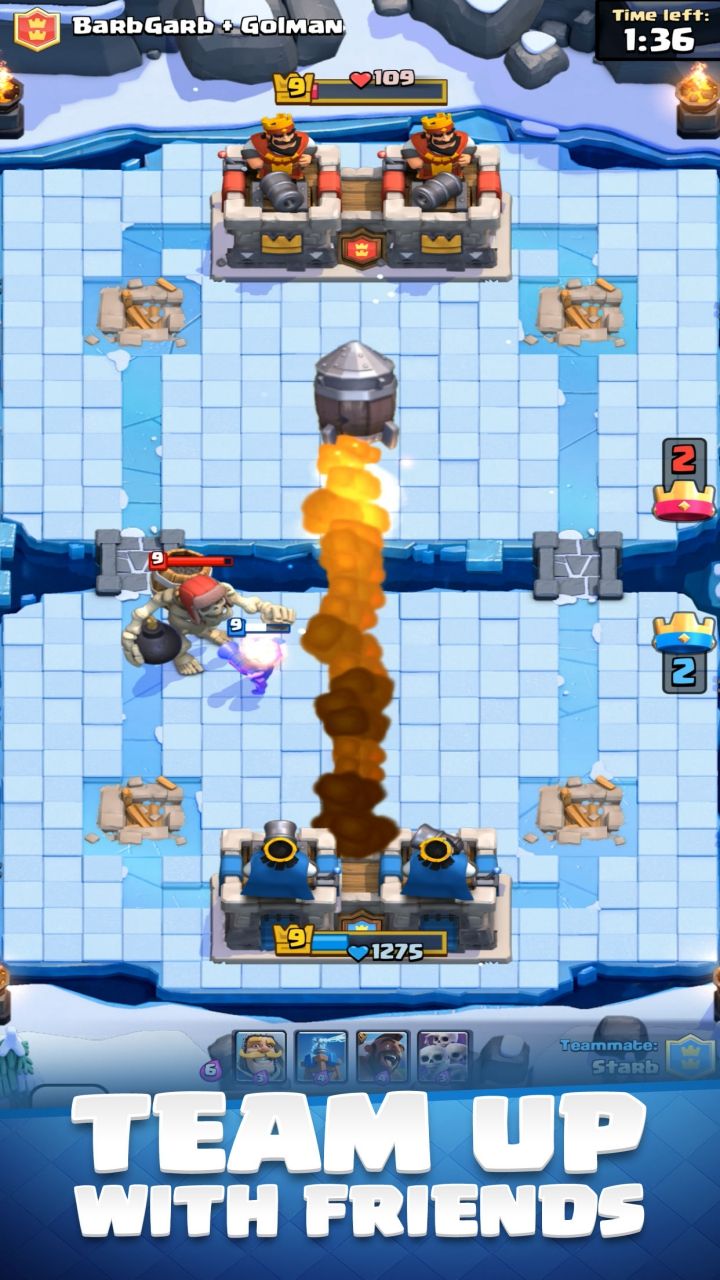 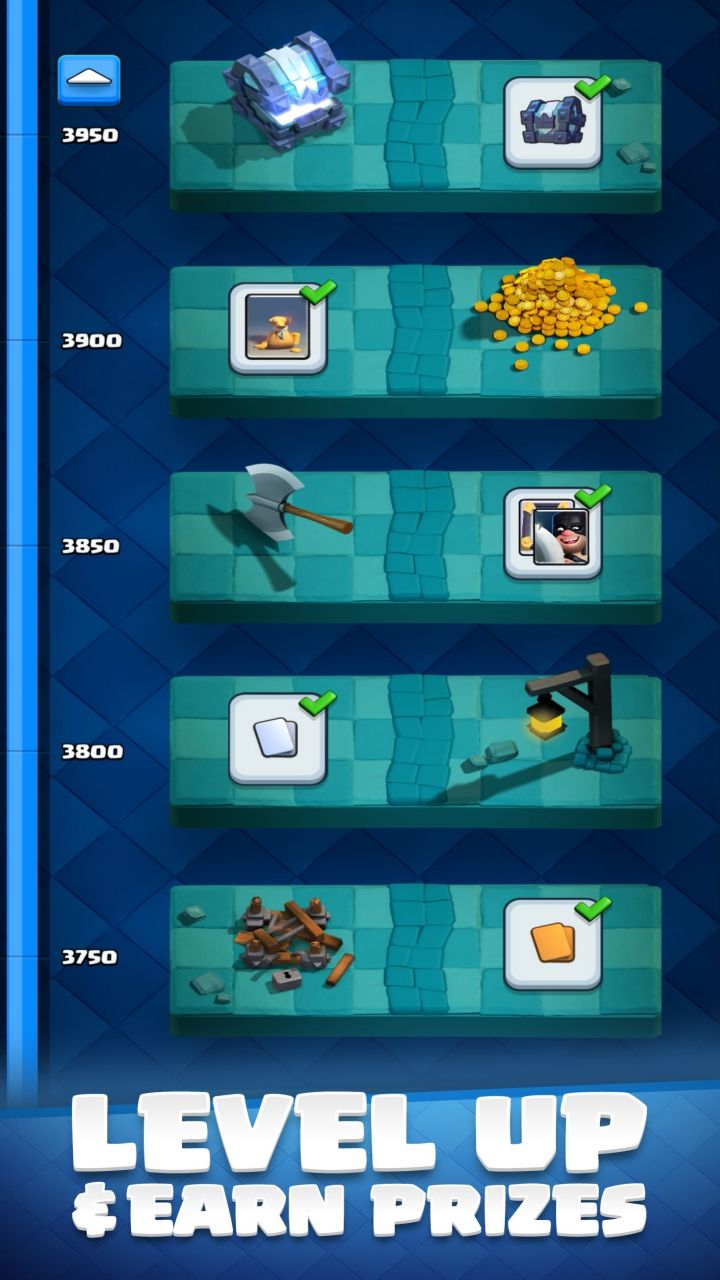 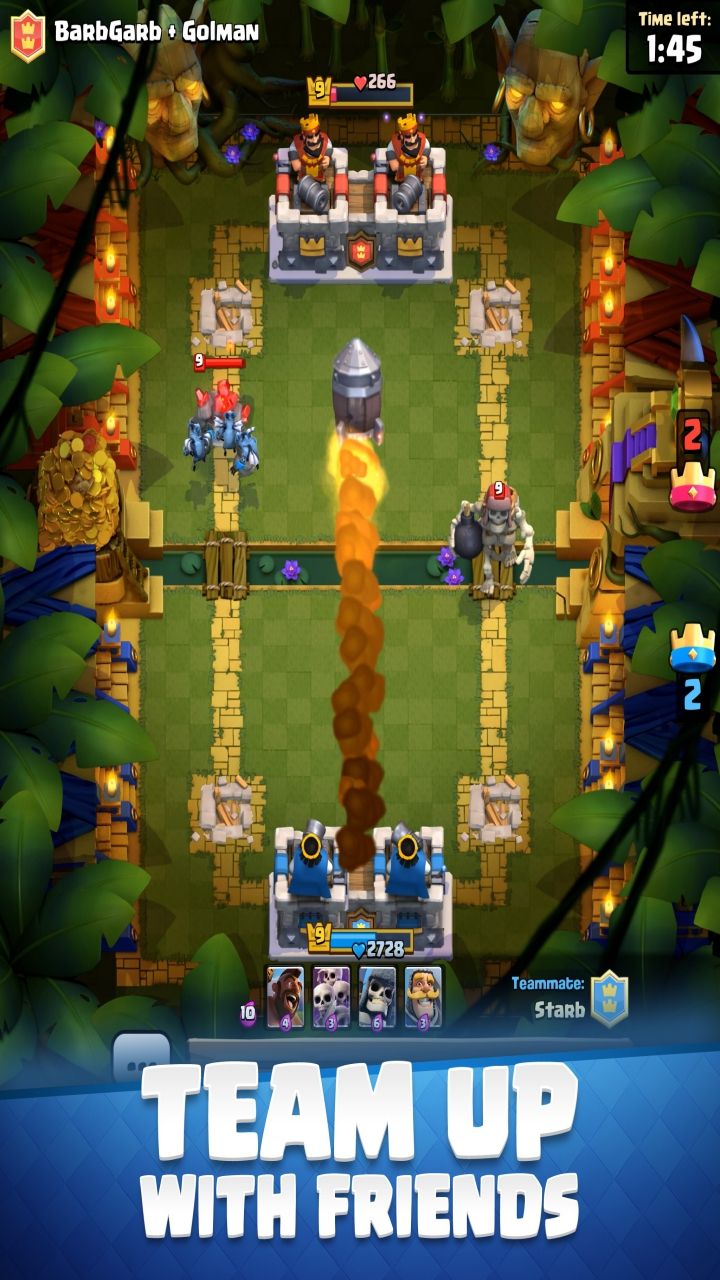 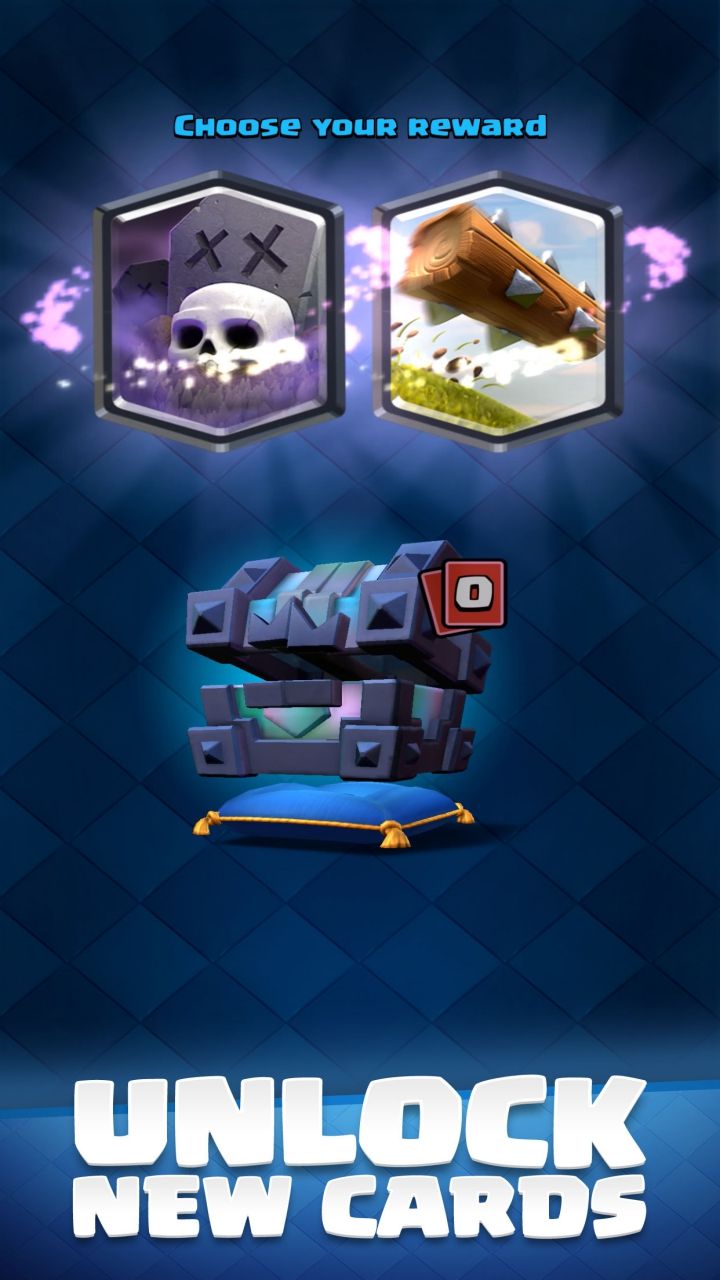 Another rip-roaring tower defense game made by veterans in the mobile space.

Finnish developer Supercell has capitalized heavily from its "Clash" franchise. Back in the day, two of the most played games on mobile were developed by them: Clash of Clans and Hay Day (both released in 2012) with incredible earnings.

Four years later, they made Clash Royale, another strategy game but focused on tower defense. Whereas in Clash of Clans you would concern yourself with base building and raising an army, in Clash Royale you'll be pitted against other players in 1v1 or 2v2 skirmishes. The premise is simple but, at the same time, complex (if you catch my drift). There are also elements of a collectible card game and, though it's probably not the first time we've seen this, this makes for a nice concoction.

Now, before I say anything negative about this game, let's first focus on the positives.

For starters, the art style carries the trademark Clash of Clans aesthetics, which is pleasant enough. Again, it's not necessarily a "powerhouse" or the epitome of graphical power, but the animations, visual effects, and UI are polished enough to admire in their cartoonish glory.

In terms of music, I like it. It leans a bit on the generic side but it does aid with catharsis. You won't be paying much attention to music either way, because this game gives no quarter or chance to "smell the flowers" as Clash of Clans does (to an extent). For the record, no other strategy game beats Warcraft II in terms of soundtrack, but I digress.

Now, the question you may be asking is: Is Clash Royale pay-to-win? My honest and blunt answer is yes. Now, that doesn't mean that you can't enjoy this game to a certain point without paying a dime. Furthermore, while I normally despise games that use this monetization tactic, for some reason, I don't believe this game should get the exact same treatment for one simple reason: It fits! Let me elaborate on this a bit.

One of the main issues I have with a lot of pay-to-win games is that they make a futile attempt to hide or disguise their paywalls, and this is particularly true with story-driven role-playing games. However, in this instance, since the whole premise of this game consists of engaging in deathmatches against other players, the pay-to-win mechanics are a bit more justified. I'm not saying I like this pay-to-win approach either, but at least Clash Royale is not deceptive about what it is and what it aims to be.

Furthermore, as a free player, you may still have a chance if you are savvy about how to use your card deck, and the matchmaking system currently in place is supposed to ensure that your opponent is not exceedingly overpowered. It's not perfect by any stretch, and many critics have been very vocal about their disagreement with the new matchmaking system, but I've seen far worse.

It is, at its core, an online game in which you compete with other players in 1v1 or 2v2 battles within a compact arena. The goal is to destroy the most number of towers on the opposing side or, alternatively, decimate the adversary's "King's Tower" for an instant victory.

Each match has a timer and you are encouraged not to overthink your strategies. After three minutes, provided that each side has the same number of crowns (relative to the number of towers you destroy) the game moves on to 2-minute overtime. Finally, if no resolution was made after the overtime period, a tiebreaker period is prompted by which towers on both sides start to deplete in health, and the towers with the least health get destroyed first. If the towers deplete at the same rate, a draw is declared.

Each battle you win will earn you a trophy. The number of trophies you attain will determine your rank. Moreover, you level up as you gain Experience points via upgrading your cards or donating them to other players. The latter feature is meant to elicit cooperation between players, which I find refreshing.

After reaching certain King Levels, you're granted access to other features and game modes. For example, at King Level 4 you can obtain Magic Items, while at King Level 6 you'll be able to join Clan Wars. King Level 14 is the highest possible level achievable.

Donations (for the purposes of gaining Experience points) are made to players of the same Clan, which is a virtual space that you can join and through which players help each other out. Donations are unlocked once you reach King Level 3.

There are 5 different types of cards: Common (grey), Rare (orange), Epic (purple), Legendary (rainbow gradient), and Champion (bright yellow). Common cards are accessible from King Level 1, while other rarities can be unlocked at higher levels. The rarest cards (Champion) are unlocked at King Level 11, and you may only have 1 Champion card in your deck at a time.

The Experience earned through card donations will depend on the rarity of the card. Common cards are worth 1 Experience point, while Rare or Epic cards are both worth 10. Legendary or Champion cards can't be donated due to their higher rarity.

You can request or send cards, whether they are Common or Rare. Requests can be made every 7 hours, with the possibility of abbreviating the cooldown period in exchange for Gems (the game's premium currency that can be collected from crown chests, in Clan Wars, in the Trophy Road, or bought using real money).

Finally, you can, in theory, collect legendary cards out of any chest, but the chances of getting one out of ordinary chests are increasingly slim. You have better chances of obtaining these cards by opening special chest types such as the Clan, Magical, and Super Magical ones. These cards can also be bought at the shop for 500 gems or 20,000 gold, at which point you may be lured into paying real-life money.

Clash Royale is, in my opinion, a decent game that's challenging enough to keep you engaged but that's not very friendly to  players once they reach a certain point. If you're willing to use some of your hard-earned money down the road and you're a sucker for tower defense/card/strategy games, then this one might be your best option.

You may also let me know what you think about this review or this game by leaving a comment below!